This smoked kielbasa is legendary. Popular at many European markets, this sausage was known to be a favorite of the Duke of England, the president of Malaysia, many NATO/European dignitaries, and even Pope John Paul II.

It rivals the most popular kielbasa in Poland – Krakow kielbasa. It originated  in two villages near Kraków – Liszki and Czernichów – and is called Lisiecka kielbasa. It’s made according to centuries old recipes passed down from generation to generation. It bears a protected designation of origin and can only be sold as Lisiecka kielbasa when made in that region. 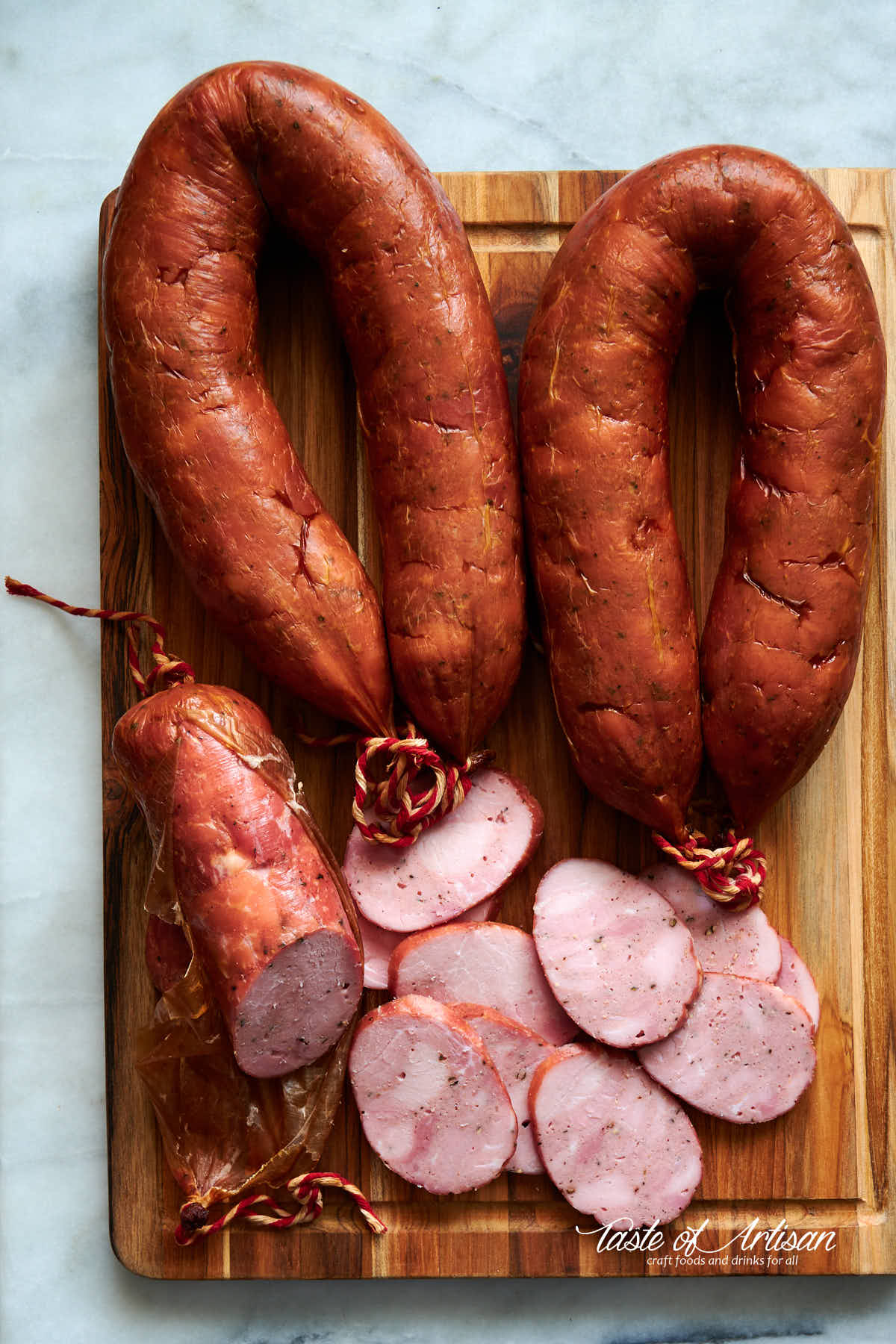 The dominating taste of this smoked kielbasa is that of seasoned pork with a hint of pepper and garlic. Similar to Krakow sausage, it reminds me of well-made smoked ham. It has a delicate texture and a very fine taste. If you want to make one of the best smoked kielbasa there is, this is the one to make. It won’t disappoint.

Stanisław Mądry is one of the producers in Liszki region who generously shared some information on how his smoked kielbasa is made in a YouTube video and an interview to Krakow Gazette. This recipe and the production process are based on what I was able to gather from those two sources. I had to fill in some blanks but in general this recipe is almost identical to his original and the results are outstanding.

Preparing and curing meat for kielbasa

Stanisław Mądry cuts lean meat into pieces and mixes it with ground fattier meat and spices, then stuffs it in natural casings using a sausage stuffer. I’ve wondered whether I could stuff chunky meat using my sausage stuffer and this confirmation was very encouraging. This is the first time I’ve seen anyone actually do that. Next time I make my Andouille sausage I will leave the lean meat as small chunks.

For my kielbasa I cut the lean meat into .75″ – 1″ pieces. The reason for that was to make sure that the pieces are at least slightly smaller than the diameter of the 1.25″ stuffing tube I was going to use. Some pieces ended up slightly bigger but that was not an issue as it turned out. 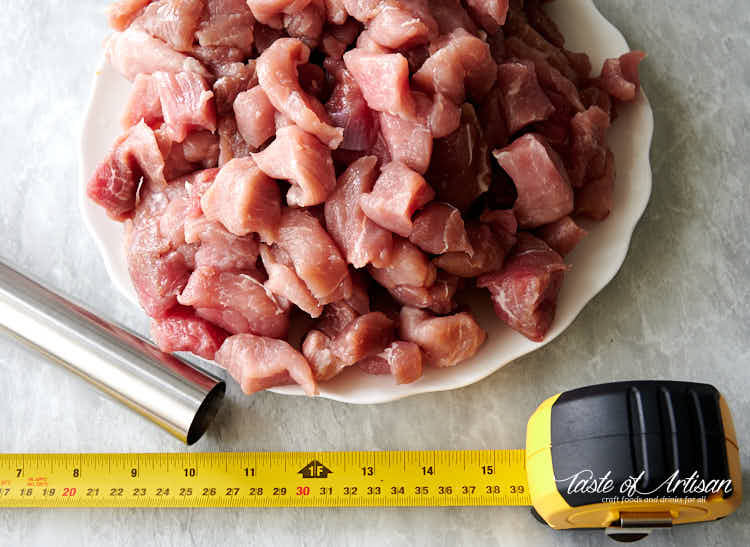 I cut the fattier pork into 2″ – 3″ pieces. Both types of meat were separately mixed with salt and Cure #1 and cured in the fridge for 48 hours. 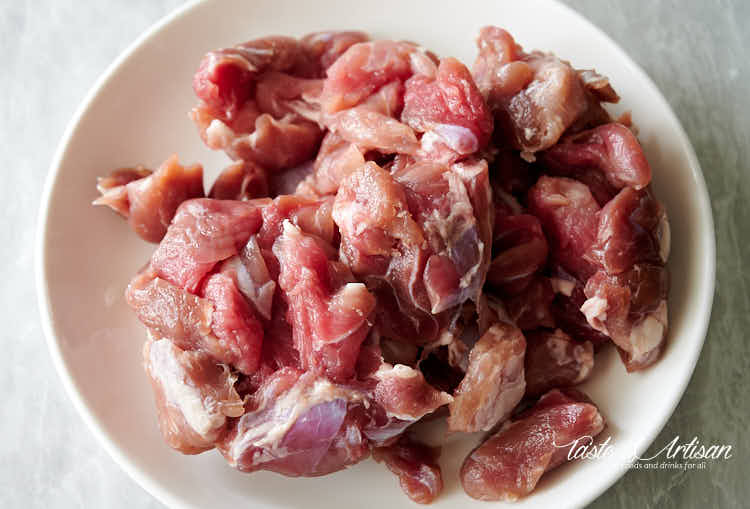 After curing, I combined the fattier pork with garlic cloves. 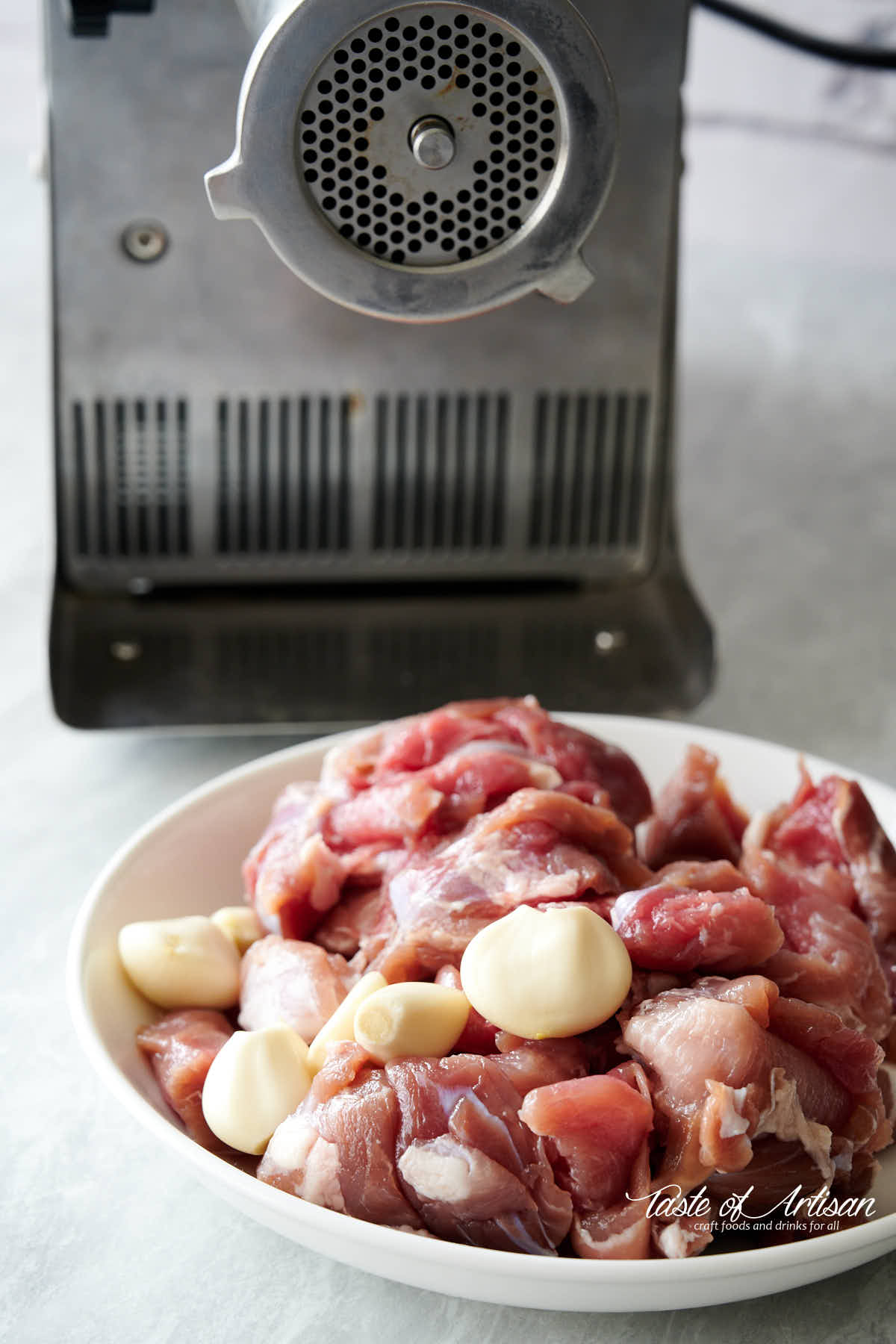 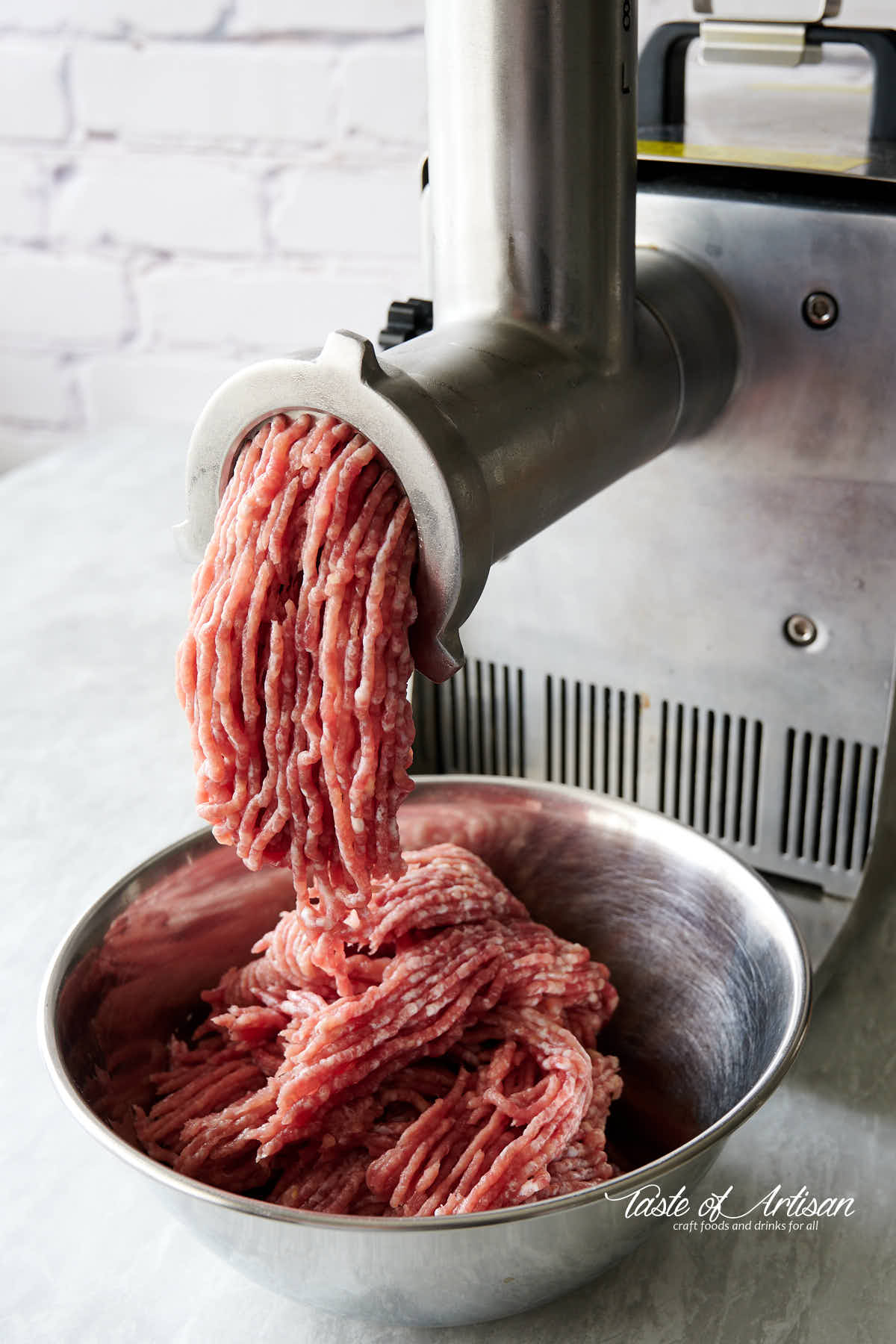 From what I could gather from the video, Lisiecka kielbasa does not contain emulsified meat. Hand-cut lean meat is mixed until gluey. Ground meat is mixed with the spices, then both meats are mixed together.

Since my batch was much smaller (3.2 kg or 7 lbs), I combined both meats and the spices together and mixed all at the same time. 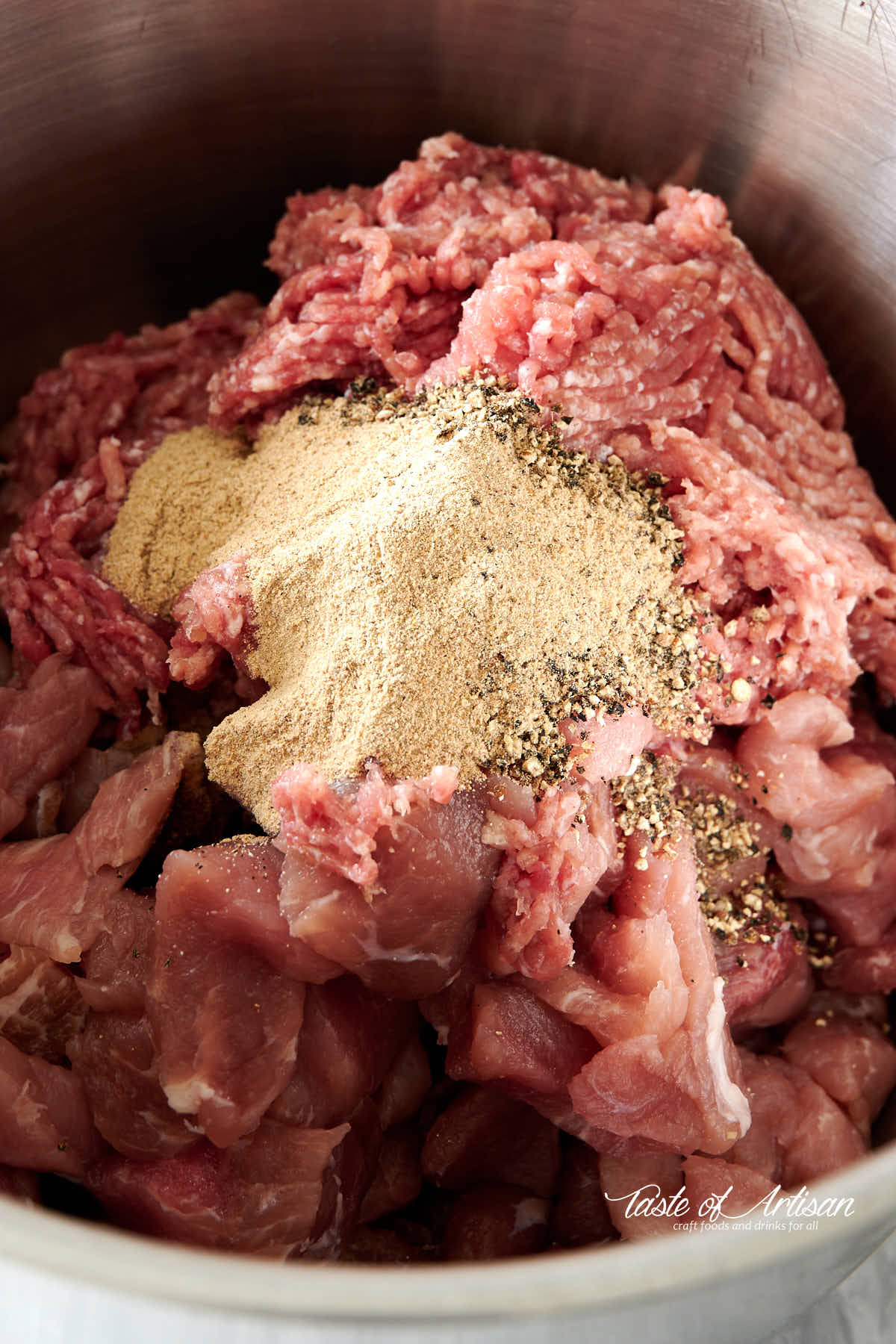 As per the  Krakow Gazette, the meat is mixed for 5-10 minutes. I used my Kitchen Aid stand mixer fitted with an 8 qt mixing bowl and a paddle attachment. Using a meat mixer is an option for larger (20 lb) batches but for smaller batches a stand mixer is the best option.

The only thing I would do differently is I would limit my batches to 5 lbs. While 7 lbs of meat got mixed quite well, the area above the mixing bowl had meat smeared all over it and required some meticulous cleaning afterwards. 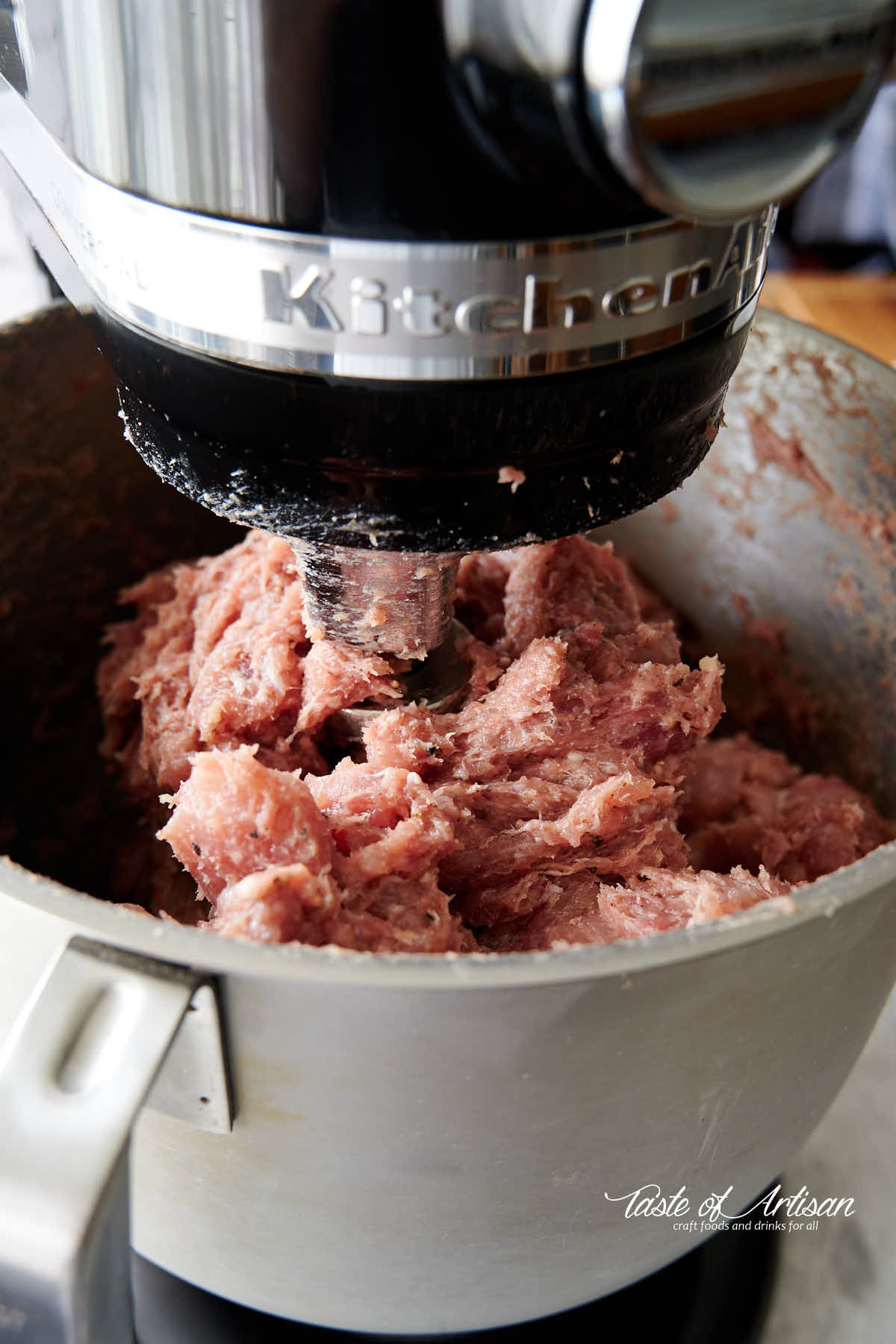 The paddle attachment did an excellent job mixing the meat. I tried using a dough hook but it wasn’t nearly as effective. It mixed the meat closer to the center if the bowl but left what’s closer to the walls untouched.

When the meat was done mixing and I took a closer look at it I realized something else. The meat chunks lost their shape and looked softer as if they were pounded out by a meat tenderizer. Can you achieve the same result by manual mixing? I don’t think so.

This sure would make stuffing easier I thought. 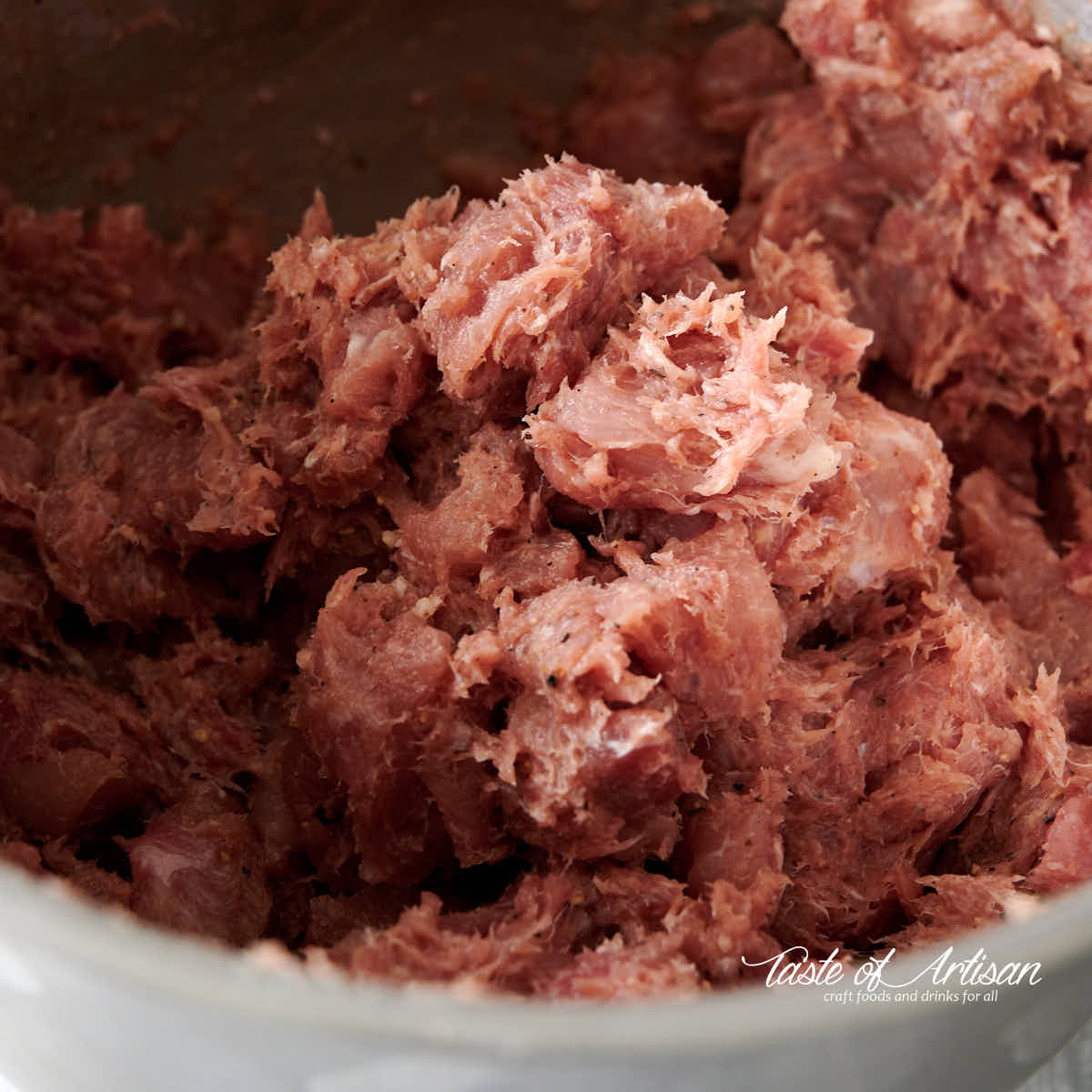 And it did. My 20 lb motorized sausage stuffer didn’t struggle even one bit.

I am sure my manual stuffer would have handled this job as well. At least if using a similar diameter stuffing tube. Lesson learned today:

Though, seeing how the meat chunks got so nicely tenderized, I have a feeling that even slightly larger chunks would have worked too. Next time I am making this smoked sausage, Krakow sausage or Andouille sausage, I will test this theory.

Traditionally this kielbasa uses 55 mm natural casings. That said, if you want to use fibrous casings it will be totally fine. You just won’t be able to bend those into rings. 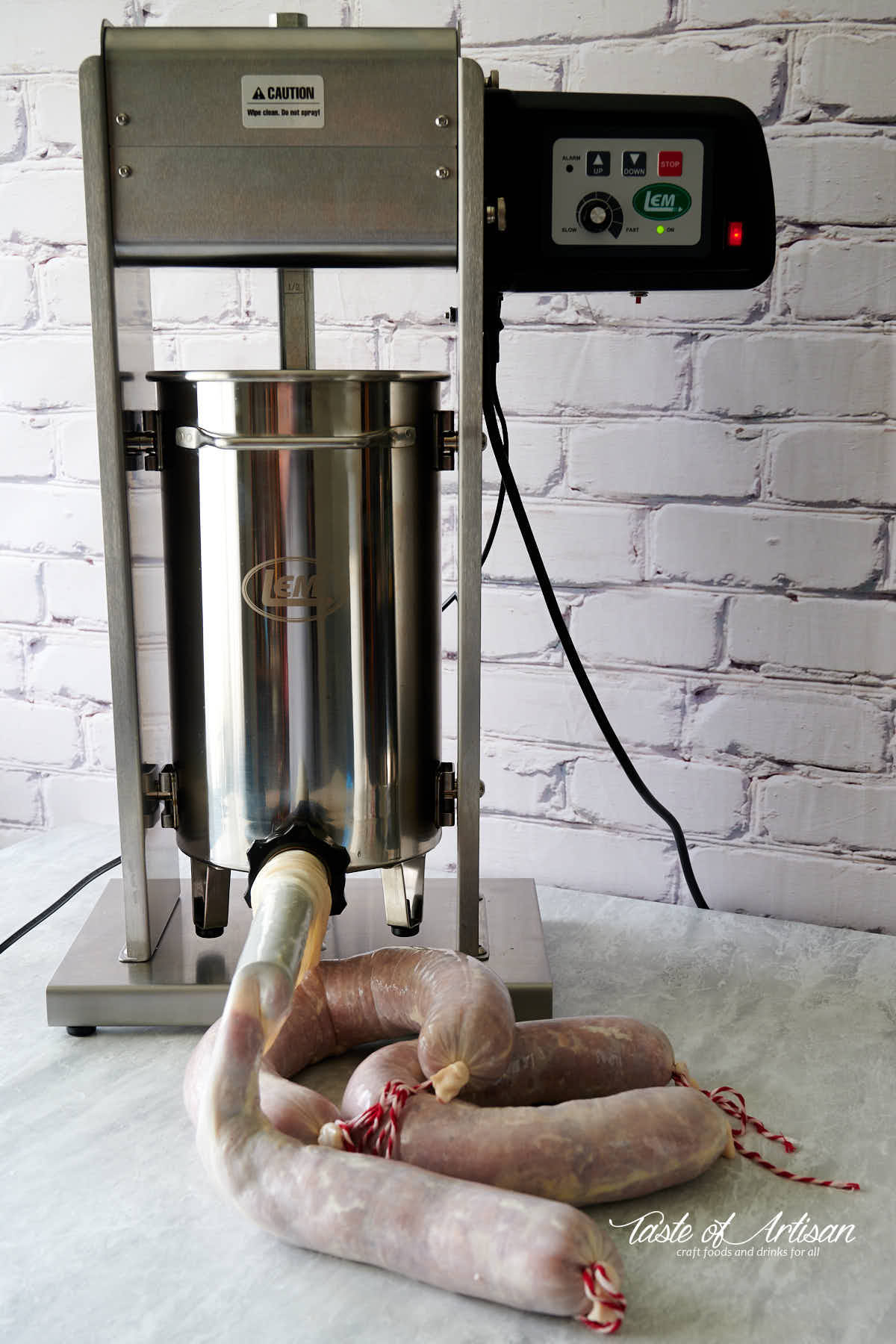 I stuffed the leftovers using a jar funnel with a narrow enough spout. Technically, you could get away with just a funnel as the casings are very large and stuffing them is fairly easy. 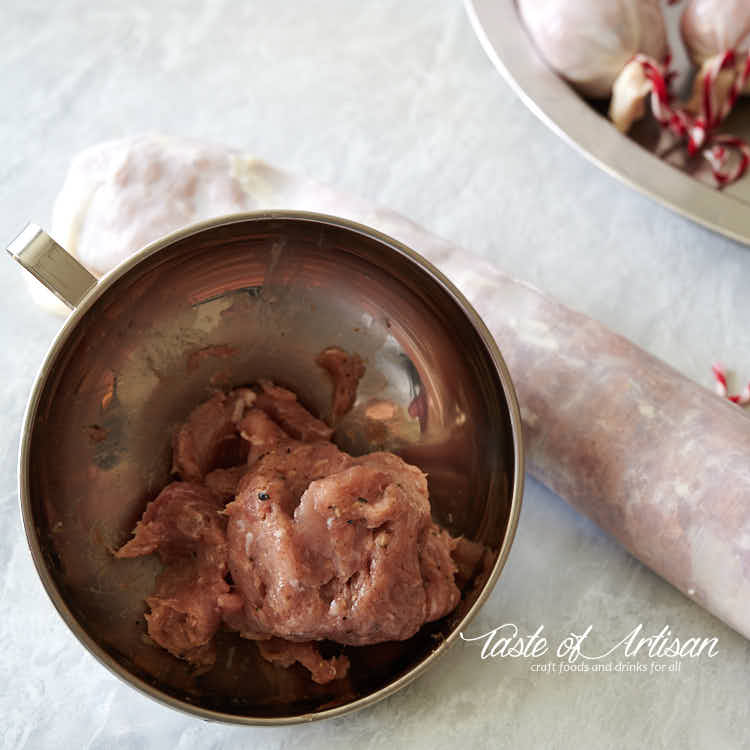 After stuffing, the kielbasa is dried at room temperature in a drafty area for 2-3 hours then in the smoker at 110F – 130F for 30-45 minutes or until dry to touch. 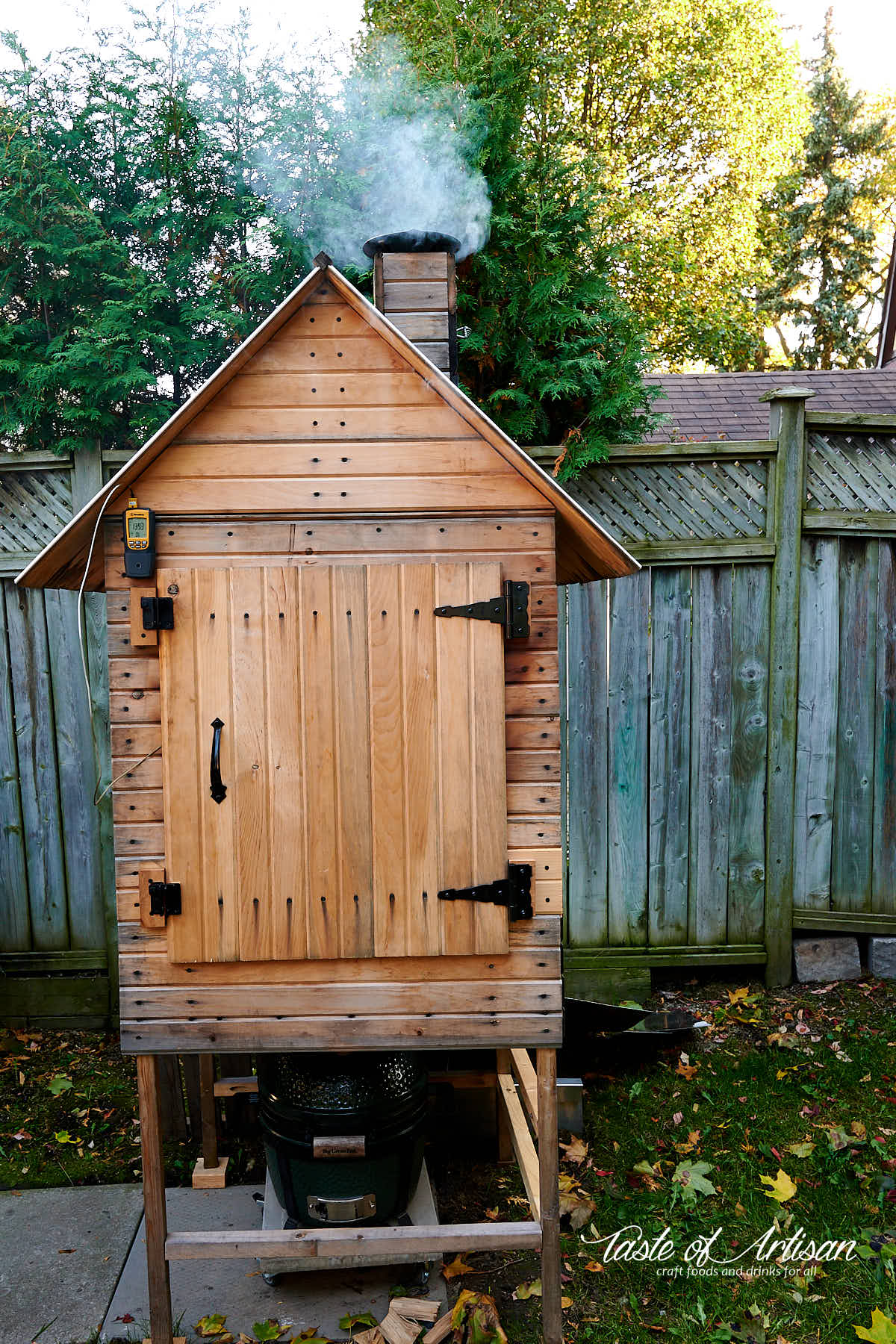 Not having those on hand, I chose to use hickory and cherry wood. 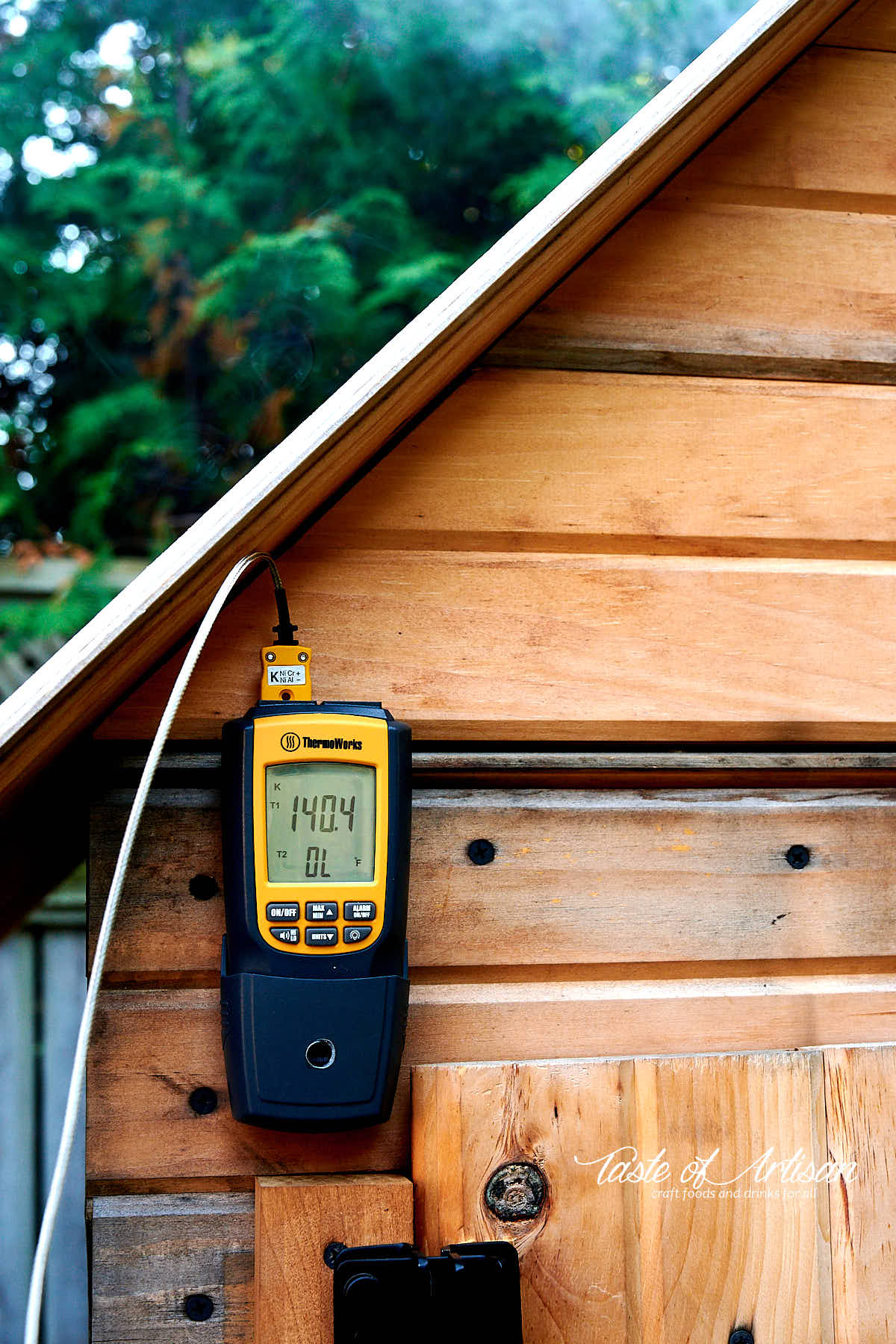 I smoked at around 130F to 140F for 3 hours, until I got a fairly dark brown color with reddish notes. 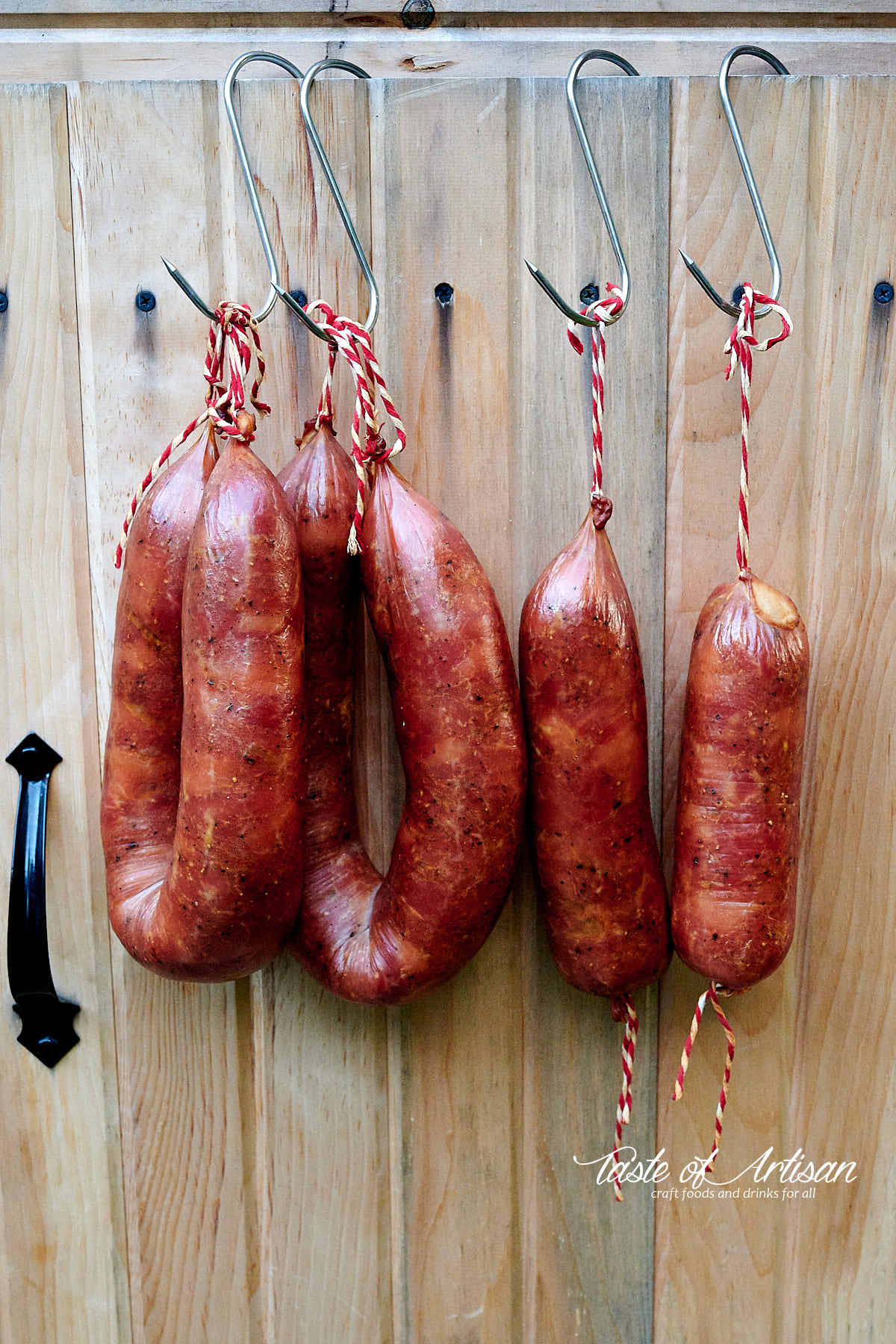 To make smoked kielbasa you don’t need a smokehouse. It’s a cool thing to have and it gives smoked kielbasa the most traditional taste, texture and smell but it’s not mandatory.

For a number of years I used a Masterbuilt Propane Smoker with very good results. In order to maintain low enough temperature on it I installed a needle valve. You can buy a pre-made assembly that comes with the needle valve already installed, like the Bayou Classic M5HPR-1 10 PSI Hose, Regulator, Valve Assembly. Before you buy, make sure the assembly is compatible with the burner in your smoker. Read more about this modification here: Needle Valve for Gassers.

An even easier option is an electric smoker, like this Masterbuilt  electric smoker. My colleague at work has had one for a few years now and loves the simplicity of use and the ability to maintain low temperatures. I find his sausages excellent though they do seem a bit less smoky than mine.

Baking is the final stage of making smoked kielbasa. During baking the temperature is (gradually) ramped up to 175F – 195F. The goal here is increase the internal temperature of the sausage to at least 154F.

Remembering how I had challenges finishing my comparably sized Krakow sausage in the smoker, I took the sausage inside and baked it in the oven on convection at 195F. 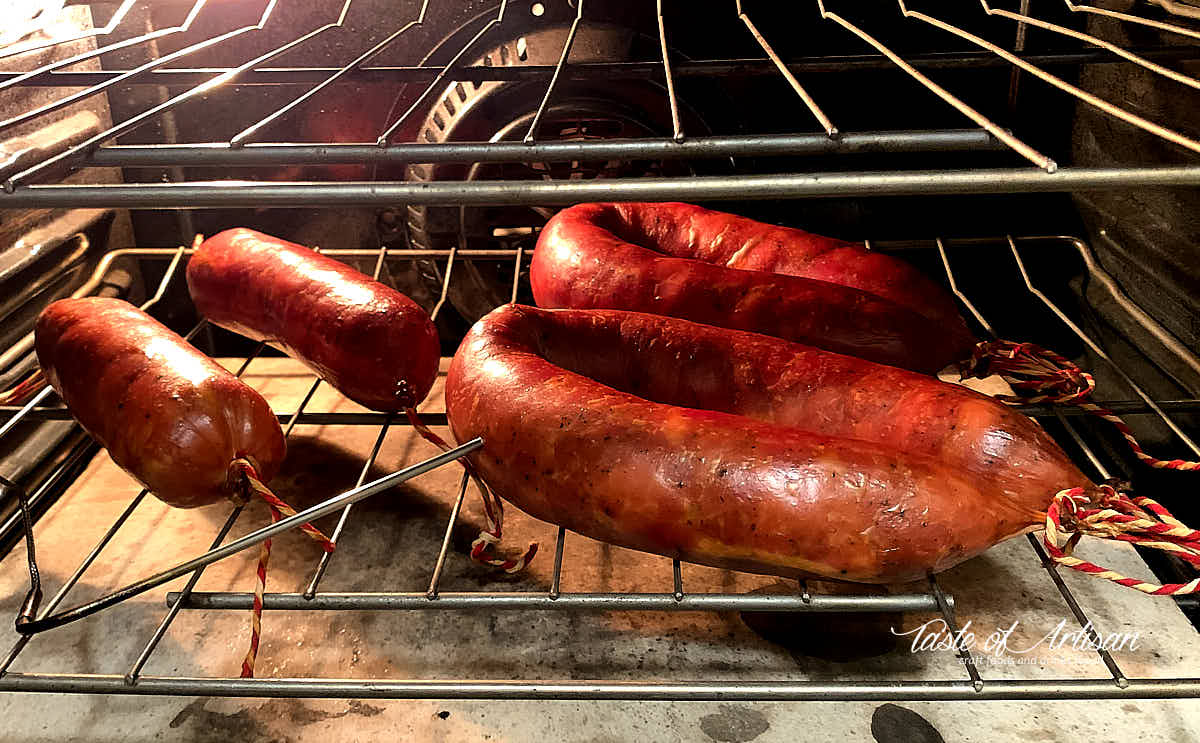 This is the first time I finished a fairly thick sausage on convection from start to finish. It worked very well. I couldn’t wait and cut one sausage after a brief cool down. Convection hardened the surface area of the sausage. To my great satisfaction, the hardening went away (mostly) after a night of cooling in the fridge. The skin peels off very easily too.

One world on convection oven baked sausage vs smokehouse baked one. Convection oven baking produced a slightly drier texture compared to my Krakow sausage that was baked mostly in the smokehouse. Perhaps poaching or steaming is the best option for this sausage. I poached a batch of my favorite swojska kielbasa and it turned out outstanding, smoky and barely any color loss. 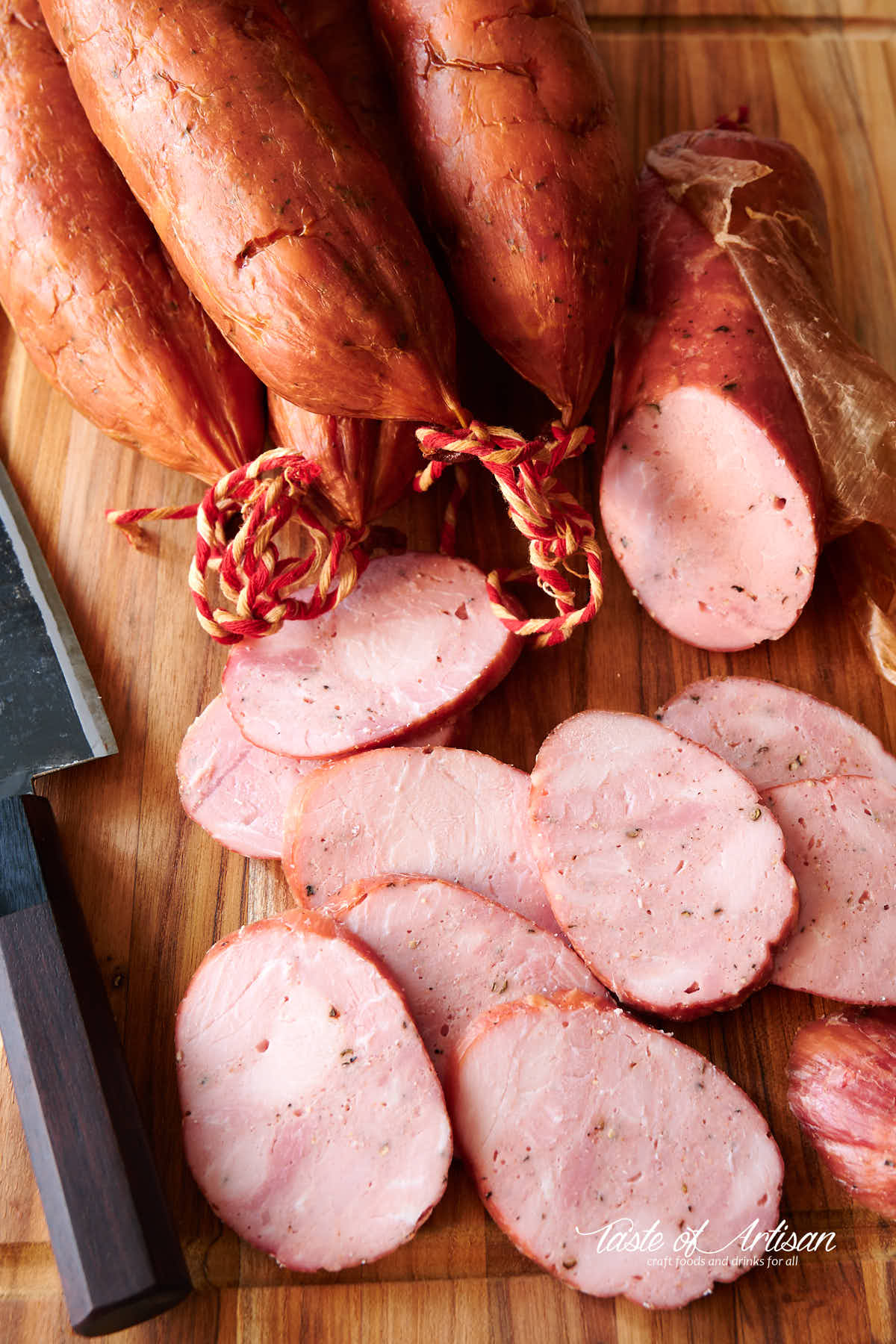 Smoked kielbasa must be cooled quickly then refrigerated. A fairly common technique is to shower the sausage with cold water for 5 minutes. This method is often used after smoked kielbasa is poached instead of baking. You will lose some smoky aroma and color with this method. I prefer to lay the sausage on a cold marble slab to bring the temperature down.

Over years I’ve learned that the best way to keep smoked kielbasa dry, fresh and tasty is to refrigerate it wrapped in butcher paper. It will keep like that for many weeks. If you want to substantially increase its shelf life, dry the kielbasa at 55F – 60F and 75% Rh for about 10 days, then refrigerate. It will become drier and will keep fresh for much longer. 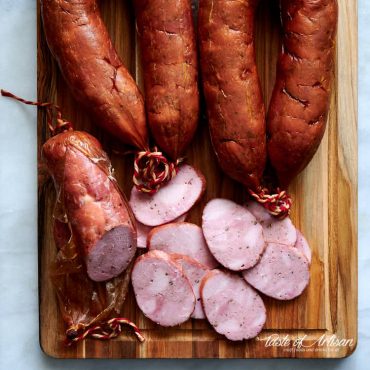 Brother in meat Victor,
It’s me again. Just a quick question. I am making this Kielbasa for the first time and I am wondering about the fat in the class one meat chunks. I used a pork loin for the class one and didn’t trim all the fat off of it so some of the pieces have up to 1/8″ of fat on them. Will this work against the presentation only or will it effect the sausage itself? I would trim them all but they are already in the cure overnight and will be stuffed after 48-60 hrs. Thanks.

Hi Jerrold, good to hear from you. No, it won’t affect the taste. Class one actually allows for some fat so some pieces with 1/8″ of fat are fully within the spec.

You and me need to chat. Got a good Chruschiki recipe? I ‘ll trade an amazeballs Horseradish recipe passed down for 100 years from Warsaw.

My great-grandma used to make amazing chruschiki, I wish I had written down her recipe. I didn’t, unfortunately.

Greetings,
These large casings you are using on your kielbasa’s (krakow and lisiecka) need to be pealed correct, as they are not edible? If not where did you get the casings? I buy most of mine from TSM and Butcher Packer and they both say that the Hog casings those sizes are non edible.
Thanks
Sultan of Salami

Hi Jerrold, I get my casings from either TSM, Amazon or a local supermarket (run by Italians). For Krakow sausage I used non-edible fibrous casings, and for Lisiecka I used leftover natural casings I had in the fridge. They were sold as ‘salami casings’ from the local store, I suspect those were hog middles. These are edible but we often peel them off as they are a little thicker and, therefore, tough to chew.

Greetings,
I’m back looking, gathering, and preparing to attack the meats with this recipe soon. Just have to get the natural casings then start. We just finished 20 lbs or so of bacon and air dried it for 2 weeks in the drier but it’s getting cold enough here in Tn to leave it out in the smoker. I am going to try this recipe for kielbasa next and will probably “age” it several weeks out there too. I have a recipe for kielbasa that calls for a fast ferment bacteria, cook smoking to 154 degrees internal temp then air drying down to -35 to 40% and it keeps in the drier vac sealed for a really long time. We have made it 7-8 months later and it was great. Might try that with a portion of this recipe. Again really love this site.

Hi Jerrold, thanks for dropping a line, glad to hear your like my site. Fast fermenting cultures are used to drop pH very quickly, which along with slat will prevent harmful bacteria from growing. Drying reduces water activity, again, preventing harmful bacteria growth. What you will get in the end is a product that can be stored at room temperature for a very long time. 50-60F and 75% Rh are best optimal conditions for drying sausages. Best of luck.

Nice Smokehouse!!
I like the sausage too. Do you think I can get comparable results in a gas smoker?

Thank you Brian. I think you totally can. I’ve smoked sausages in my Masterbuilt propane smoker for years and as long as you can get it to run at 130F-140F and produce good smoke you will have very similar results. Check out my swojska kielbasa post. I used my gas smoker to make it.

Hello! I am Victor and welcome to Taste of Artisan, a website dedicated to helping people learn to make delicious artisan foods at home.