Pickled turnips can be found at just about every shawarma place you visit, that’s how I discovered them. Frankly, I was somewhat partial to them until I tried them at a newly opened shawarma place nearby. That’s when I became a huge fan of these little purple morsels.

Somehow their taste was so clean and so balanced that I always wanted more than what they would put on a shawarma – usually one or two pieces. I’d ask for extra Kabees El Lift (Lebanese for pickled turnips I was told), and the owner would add just one more pickle. I felt the urge to tell him to add a dozen more as they were so little and so good, but I just couldn’t make myself say that.

It won’t come as a surprise, but am a sucker for pickled, marinated and fermented vegetables. Marinated Zucchini, Marinated Eggplant and Tomatoes… Delish! I decided to make those wonderful little pink morsels myself so I can eat as many of them as I desire and as often as I want. It turned out to be quite a challenge. No, there was no shortage of recipes out there, it’s just that none of them really gave me what I was looking for. Somehow the turnips would come out tasting similar, but not quite the same. They lacked that clean, balanced taste.

To make a long story short, I went through a number of recipes, experimented with salt levels, adding different spices until I finally got it. This recipe is IT! It’s as plain as plain can be, and I guess that’s what it was missing.

I found that plain distilled vinegar works for pickled turnips much better than apple cider or other types of flavored vinegar. Kosher or good quality sea salt makes a huge difference to taste. Table salt is the worst. If you want to be sure, use kosher salt.

The amount of salt mattered too. The turnips that I liked were on the less salty side, and I loved that. A number of recipes that I followed required just a tad more salt than I liked, without realizing it at first. Once I fixed that the turnips tasted perfect. 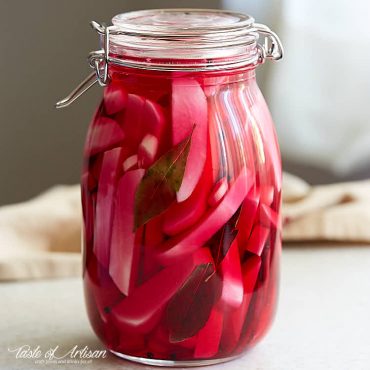